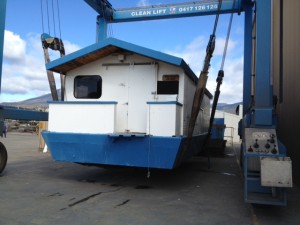 The punt when it first arrived at CleanLIFT

Several months back we lifted out of the water the old Bellerive fish punt. Whist the wharf is under going dramatic repairs the new owner of the punt Michael Pace, of Pace financial Services, saw fit to repair and revamp the popular business’s floating shop front.

We at CleanLIFT have been witness to the success and frustration of many restoration projects but this was a something a little different to what we were accustom. Judging by the state of the punt when it first came out of the water we were surprised it really did out live the wharf. Fist sized holes had started to appear in the severely corroded steel waterline, not to mention the oyster farm that had been obviously growing steadily for several years, was not adding optimism to our first impressions. However Micheal and his brother Leigh, along with a band of other lucky friends, didn’t seem to fussed about its current condition. They had an image in the heads as to what exactly this run down fish punt was going to look like once they were through with it. 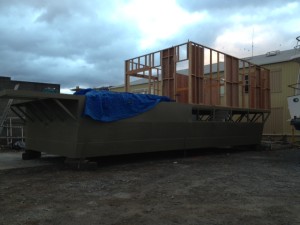 Many hours later with the assistance of two water pressure cleaners and 6 men armed with scrapers, the fish punt was as close to clean as it was going to get. The months to follow were filled to bursting with sandblasting, welding on a new water line, painting, cleaning, painting again and frustration before it was lifted to be moved around the yard to begin construction of the new shop. To be honest we didn’t’ see a lot of visual progress for a long while. But Leigh, who was set the task of returning the punt to its former glory, was busy everyday measuring, cutting, welding and nailing the frame work and panels into place. Then one week there was framing up, the next week walls, and before we knew what was happening it was seriously looking like a fish punt worthy of the great reputation the old business had.

Michael and his team are in the final stages of fitting out the shop.

Soon it will be back in the water for the last preparations and tests.With a small amount of luck it’ll float. 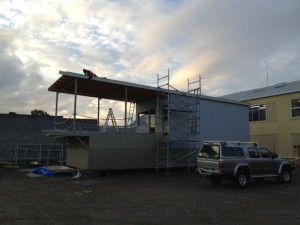 Walls and roof are up

But so far for us it has been a whirlwind transformation from the dilapidated old punt that it was to a brand new and impressive fish punt that is nearly ready to be towed home to resume its trading. The road for vessel restoration is a long one and never traveled without hiccups. However the finish product makes all the hard work and frustration well worth it.

We look forward to seeing the Fish Punt back in the water and finished. You’re nearly there guys. 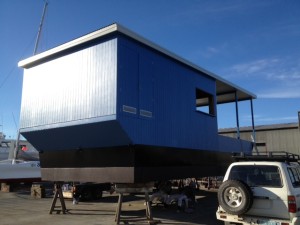 The punt in its final stages